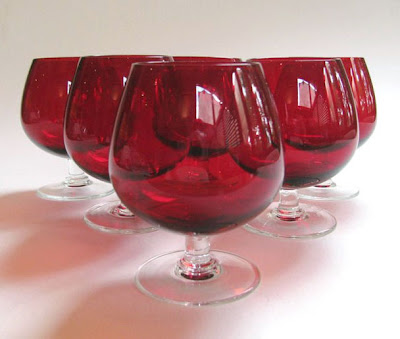 Did you know?
Most of the ruby glass we see today has been produced during the later part of the nineteenth or early twentieth centuries.

Antonio Neri first alluded to the process of making richly coloured ruby glass in a book on glass manufacturing first published in 1612 though Johann Kunckel of Potsdam, Germany, is credited with having produced the earliest known examples in 1680. Kunckel’s process used a small amount of gold in the mix that resulted in a beautiful red colour. German glassmakers called this process Rubinglas.

However, it was not until the Great exhibition of 1851 that the British displayed any interest in the process. From then on until the end of the 19th Century ruby glass items became extremely popular with the rich and poor alike, and the factories of industrial England churned out a huge selection ranging from inexpensive kitchen jugs to ornate chandeliers. Victorian technology had also vastly improved the production process with the ruby colour obtained using extremely small amounts of copper or gold dissolved in nitric acid and then mixed with the raw materials.

The best examples of Victorian ruby glass of British provenance show a deep, rich colouring. Not surprisingly, they’re keenly sought after by Australian collectors and prices start at around $125.00 for small jugs rising quickly into the thousands for more ornate items. Generally speaking, the price depends on the age and quality of the item. A Victorian ruby glass basket of good quality can fetch anything from $650.00 to $900.00 while a mid-Victorian jug of average quality can be priced around $250.00 to $300.00. An early Victorian example with gilded or cameo decoration can be valued at up to $4000.00. Despite these prices, good quality late Victorian ruby glass is probably a good area for the new collector to consider.
reference: Alan Carter, Treasure Hunt

Want to join the discussion?
Feel free to contribute!